The province of Qinghai is named after China's largest salt lake, Qinghai Lake, which means bluish green sea in Chinese. The cities and prefectures around Qinghai Lake are conveniently named Haidong, Hainan, Haixi, and Haibei, referring to the east, south, west, and north of the lake, respectively.

In November 2020, Qinghai attracted global attention following the completion of two renewable energy bases in Hainan and Haixi, each capable of generating over 10 million kilowatts of green power.

Our journey today takes us to Tara Beach, 60 kilometers southeast of Qinghai Lake, where a blue sea of solar panels has been built in the image of its famous neighbor.

From Xining City to Gonghe County, the steep mountains on both sides of the road gradually recede, revealing a wide horizon. Cattle and sheep can be seen on vast open grasslands, situated under a deep blue sky dotted with white clouds — a scene of peace and tranquility. You'd be forgiven for not noticing the traces of last night's wind and snow, revealed only by the gleaming white peaks of distant mountains.

Gonghe County is one of a kind within China, known throughout the land by its striking name, which means "republic".

Prior to 2011, Gonghe County was not as well-known globally as it is today. However, the arrival of the world's largest renewable energy base has put it firmly on the map.

In this small county with a population of less than 50,000, cranes fall far short of demand during peak PV (photovoltaic) plant construction. Industries such as catering and accommodation, auto repair, hardware, and building material manufacturing all began to rapidly develop, and the small town of Qabqa quickly became overcrowded.

Such prosperity has previously only been witnessed in the 1980s, during the construction of the Longyangxia Hydropower Station. 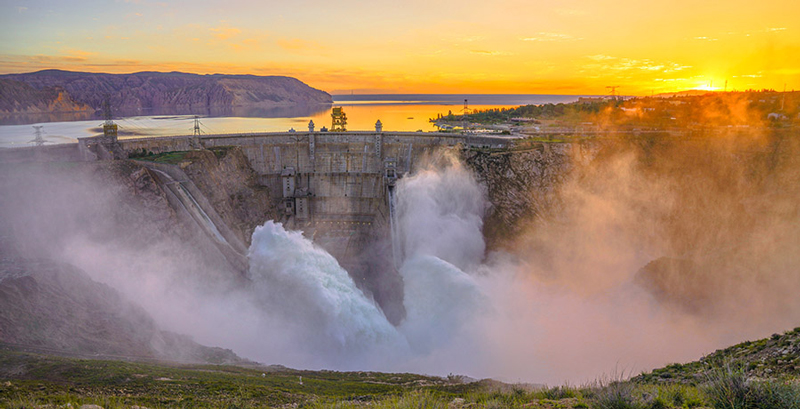 This is all due to Huanghe Hydropower Development Co., Ltd. (Huanghe Company), a Chinese state-owned utility company named after the Yellow River.

September 26, 2020 is a memorable day for both Huawei and Huanghe Company.

At 17:18 on this day, the final part of Qinghai Gonghe 2.2 GW PV plant was connected to the national grid, marking the dawn of a new era of power supplied by the world's first ultra-high voltage (UHV) power transmission project (Qing Yu DC) with 100% clean energy.

In addition, the project has become the world's largest single PV plant, as well as the quickest renewable energy power generation project to reach completion (from winning the bid to fully connecting to the grid for one year).

Qing Yu DC is the world's first UHV power transmission line to feature 100% clean energy. Spanning up to 1563 km, it supplies continuous clean energy from Hainan in Qinghai all the way to Zhumadian in Henan. One could say that sunlight from the northwest plateau is lighting up households in the central plains.

With the 2.2 GW PV power plant in Gonghe, as well as the inventory wind power project according to the 13th Five-Year Plan of Qinghai, the installed capacity of renewable energy in Hainan and Haixi now reaches 15.436 million kW and 10.12 million kW respectively, allowing the 13th Five-Year Plan energy development goals of Qinghai Province to be achieved ahead of schedule.

Qing Yu UHV DC spans up to 1563 km, enabling sunlight from the northwest plateau to light up households in the central plains.

As for Huawei, this historic moment marks the culmination of 270 days and nights of hard work and joint efforts with Huanghe Company. It also represents a badge of honor following ten years of persistence and excellence.

Ten years ago, central inverters were still the mainstream power generation solution throughout China. However, Huawei joined forces with Huanghe Company in 2013 to launch the first large-scale ground-mounted PV plant using string inverters at the Golmud PV plant in Qinghai, China. This marked a major breakthrough in string inverter development and kicked off an all-new industry trend.

In 2014, the two parties launched the smart PV solution, which was based on string inverters, to comprehensively modernize PV plants.

One year later, the Smart PV Joint Innovation Center was established in Huanghe Company. This center has since incubated many innovative technologies, and played a forward-looking and strategic role in supporting and leading the sustainable development of global renewable energy.

For example, one such innovation is the Smart I-V Curve Diagnosis technology that has redefined the O&M model, significantly improving O&M efficiency and reducing the LCOE.

By 2017, string inverters had overtaken central inverters as the mainstream power generation solution. Today, the Smart I-V Curve Diagnosis technology is widely used around the world to replace the traditional complex and inefficient manual O&M inspection methods. The world has reached PV parity quicker than most analysts anticipated.

Smart PV has exceeded all expectations, taking the industry by storm. Thanks to continuous breakthroughs and progress, the world's largest PV power plant (encompassing an area of 609 square kilometers), and support from the 100 MW experiment and test base, Huawei and Huanghe Company have transformed the Yellow River region into a shining example for the global PV industry.

The total fault rate of Huawei's smart PV service in Tara Beach is less than 0.6‰.

According to Xie Xiaoping, chairman of Huanghe Company, collaboration between both parties has yielded incredibly successful results.

In just ten years, this beautiful landscape nestled between the Yellow River and Tara Beach has achieved six world records:

This beautiful landscape nestled between the Yellow River and Tara Beach has achieved six world records.

A scene at the 100 MW experiment and test base

A Shepherd's Song in Tara

However, this area was part of the Gobi desert for a long time, one of the worst-hit areas in the upper reaches of the Yellow River owing to drought, low rainfall, and overgrazing.

Since 2011, following the construction of PV power stations, the laying of solar panels has weakened evaporation on the surface and increased soil moisture. Vegetation has gradually been restored, and the ecological environment has been significantly improved.

Power is generated on the panels as sheep graze happily underneath — a striking image of modern technology and nature co-existing in harmony on the Qinghai-Tibet Plateau.

As described in a Chinese ancient poem: when the winds blow, and grass bends low, sheep and cattle will emerge before your eyes.

Ten years later, Tara Beach has been restored to its original appearance.

A shepherd's song in Tara: Power is generated on the panels as sheep graze underneath.

Images of sheep roaming among the solar panels of the PV park went viral overnight, as the songs from Tara's shepherds rang throughout the plateau.

On the way to the base, Huan Xingsheng, Deputy Director of the production technical department in Huanghe Company's PV Maintenance and Repair Company, told us how Tara Beach's "PV sheep" have become local celebrities and are registering their own trademarks.

Huan Xingsheng at the base

Duo Goujie is a 50 year old shepherd from Tiegai village. His family raise more than 550 small-tailed Han sheep, and these animals require a high-quality pasture. He and wife usually graze their sheep here at the PV park.

"There used to be no good grass in this area. It was all sand. Any grass that did grow was just like the kind you saw on the roadside, very hard, and the sheep didn't like to eat it." Duo Goujie told us with a smile on his face.

The herdsman and his wife at the door of his sheep enclosure.

Since the planning stages of the Tara Beach PV project, Huanghe Company has carefully considered how to restore the local ecosystem during the engineering construction, and how to preserve and improve the local environment during development to achieve a win-win situation between the PV project and the ecosystem.

To reduce the impact of desert winds and sand on solar panels, they started by sprinkling grass seeds around the solar park. Surprisingly, the grass inside the PV park quickly grew much higher than that outside.

"We observed that the shade provided by the solar panels reduced the evaporation of surface water, and that the water used to clean the panels seeped into the ground, so the grass grew faster." Huan Xingsheng said.

However, new problems arose: The grass grew too high and began casting its own shadow on the PV modules, which affected the energy yield. In addition, dry grass posed a fire hazard during winter months.

Since 2015, Huanghe Company has allowed up to 600 sheep to graze inside the park, which has seen positive results.

Permitting animals to graze not only facilitates the shepherds, but also ensures that grass within the campus remains below a certain height so that power generation is not affected.

Based on national strategic requirements as well as those relating to Qinghai ecological civilization construction, Huanghe Company has carried out research on the impact of its large-scale desert PV plant on the ecological environment since 2015.

Since then, Huanghe Company has adjusted the height of the bracket from 50 cm to 1.2 m above the ground, ensuring the smooth passage of the sheep.

Despite the increased construction costs, Huanghe Company has explored and developed a model of "PV + eco + local benefits". The company signs pasture agreements with the local shepherds, offers job opportunities to villagers for the construction and O&M of the PV park, and allows them to plant cash crops such as Kunlun chrysanthemum and Permeable grass in the park. While developing the PV economy, the company has also promoted the development of local

transportation, urban construction, and tourism, accelerating the development, prosperity and stability of the upper reaches of the Yellow River where ethnic minority groups reside.

In 2018, based on the ecological restoration taking place in Tara Beach, Huanghe Company set up the key national laboratory for ecological water conservancy in the arid regions of northwest China. The laboratory is dedicated to ecological governance research of the arid and desertified areas in northwest China, as represented by Qinghai.

Today, more than 5000 PV sheep graze and wander in the park, and the songs of shepherds can be heard throughout the grasslands. An air of happiness and positivity now reigns throughout this once arid region. 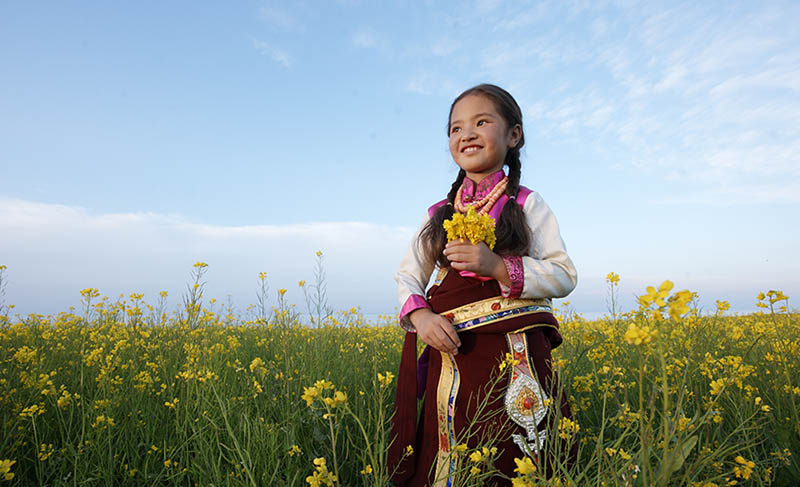 Following ten years of progress, an oasis has reappeared in the Tara desert.

Looking out from a 30-meter-high inspection tower, a blue sea of solar panels can be seen next to Qinghai Lake. The beauty

of Qinghai certainly lives up to its reputation. 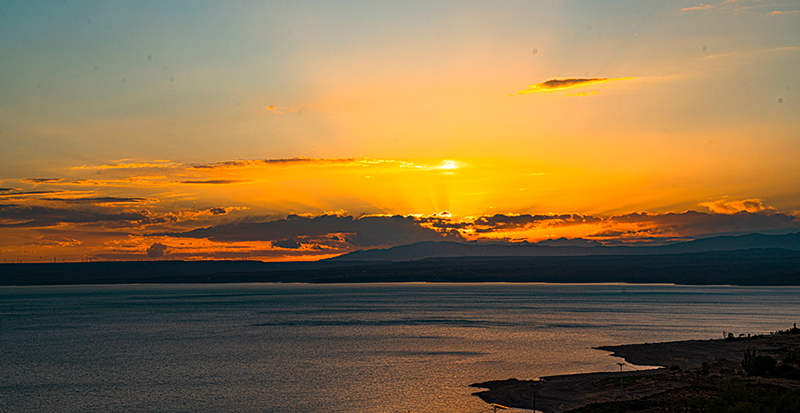 The beauty of Qinghai lives up to its reputation. 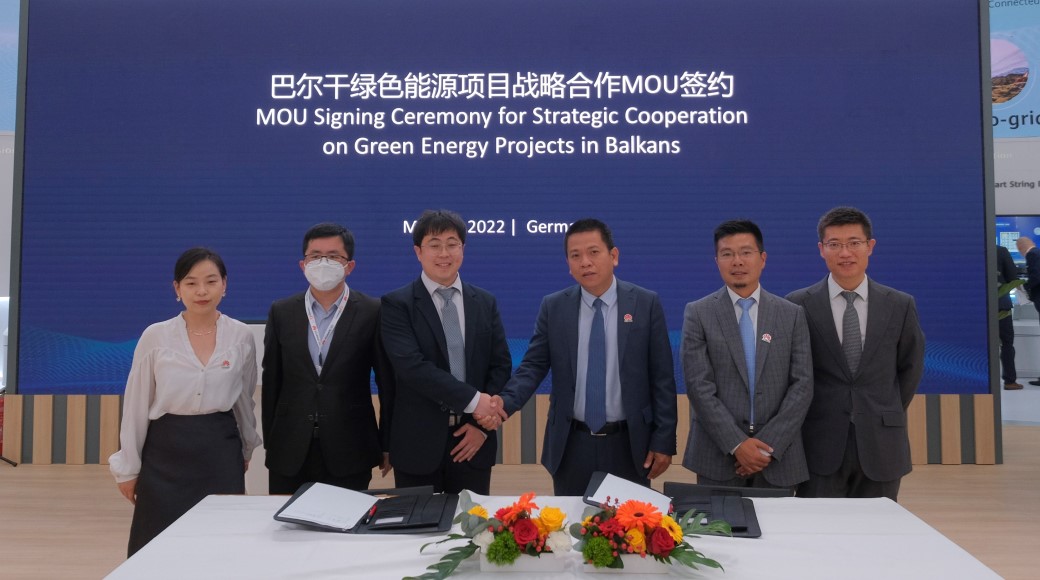